Goodness! Chris is up early – I had bearly finished reciting the Office. She says we are going to something called the Kent Show to help in the ‘Church Tent’.

We head off on the road we take to Dover but then turn off to a place called Detling. Chris is surprised that there is so much traffic at this time but is relieved to see that most of it is turning down a little lane. We carry on up the hill and soon join a line of cars which are moving slowly. Soon we turn down a small road into a huge field. We eventually stop in the middle of another field and Chris takes everything we need. She leaves the car but does not leave any food or water. This worries me but there is plenty of grass so it may graze when we are away. I always had to find good pasture, or a good stable for my horse.

Chris has damaged her knee so find walking difficult at the moment. Fortunately she seems to know where we are going, partly because there are a lot of other people heading in the same direction. We go through a gate and into an area which has lots of tents and huge constructions around. I would love to explore but our tent is quite close.

There we meet Canon Jean and her husband whom I recognise from Rochester. Chris also knows some other people including Canon Caroline from Canterbury. I am pleased to hear that Chris will be doing hand massage. She did that in Rochester and it does mean she can sit down. Can you see me in the image below? 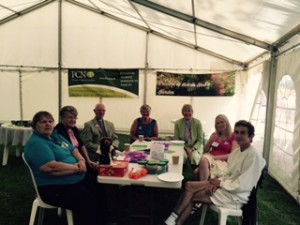 Our team for the day

One of the team heard Jean and Chris talking about her knee and later asked if she could pray for Chris. Chris said that she felt a warm glow in her leg during the prayer, so let’s hope. I was praying too.

I was able to explore a bit when Chris needed to find the necessarium (Can you guess what that is?) I was interested to see lots of different tents, animals and competitions just like the fairs in my day. Chris found a friend in one of the tents so we chatted then stopped to listen to a choir. Chris said she knew some of those people.

At lunchtime a huge, noisy bird began flying around over the field. I had never seen anything like it before but Chris said it was called a ‘Spitfire’. Everyone seemed very excited to see it. It flew around for quite a while before disappearing.

After lunch Canon Caroline said that she had volunteered for an omelette cooking competition against Canon Jean! I was told an omelette is an egg dish. They both dashed off and Chris and I walked behind. Chris has found walking easier since the prayer this morning. Praise the Lord! 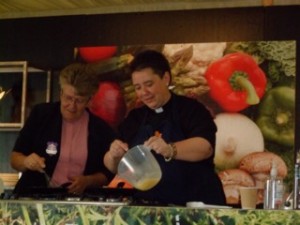 The race is on!

We found the place where the kitchen was and saw a man making things. When he had finished he called Canon Jean & Canon Caroline up to the front for the contest. Chris saw someone else watching and we went over to chat. Chris said that this lady was the wife of the Bishop of Dover. I didn’t know Dover had a Bishop but Chris knows him, too. Canon Jean finished first but I am not sure who ‘won’. A lady brought the finished omelettes around for us to try. I was pleased to see that no one was hurt in this competition – some of the contest in my day were quite violent.

By the time the competition was over I was quite exhausted. When things began to quieten, as people began to go home, we decided to leave. Before going we had another wander in a different direction. We found some deer, which Chris said were Reindeer and one had a baby. I had never seen them before. We often had deer wandering around Rievaulx and when I was a boy, in Scotland, we sometimes went hunting deer but those were Red Deer or Roe Deer. King William brought Fallow Deer to England but these were only found in the Royal Forests in my day.

I was relieved to see the car so that I could rest my paws but I was surprised to see that we turned in the opposite direction to home. Chris said that we are not allowed to turn the way we had come but it was alright because she knew the way home. I am glad to say it did not take long to get home.

I am absolutely exhausted so I am going to Compline then off to my bed!