Chris is off to play something called croquet in a place called Chartwell. Apparently this was the home of a very famous man called Winston Churchill who was once Prime Minister. I am intrigued so I thought I would go along. We have a picnic and something to sit on plus a very nasty looking weapon which Chris says is a Mallet and is part of the equipment. I hope this game is not violent as I would hate to be hit by that thing!

Chris says there were not many people when we arrived; I beg to disagree but I don’t want to argue! It was quite a long walk from the car to the garden and some of it was difficult for Chris because she has a bad knee. 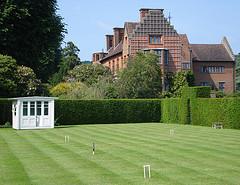 The lawn ready for play

During the walk I was told that Winston Churchill had a cat called Jock. Before he died he said that there should always be a cat with a white bib and 4 white paws in the house.Chris says he died in 1965 so that is 50 years ago, and do you know? There is still a cat called Jock living in the House. Amazing!

When we finally arrived at the special place, called the lawn, some of the people were already there. Chris and her friend, Rodney, played a game against two other people and Chris won! Rodney was pleased. Chris said that does not happen often. The game seems very sedate, but I was pleased to see it is not violent. Chris says it can get ‘nasty’ when people try to block the opponents. 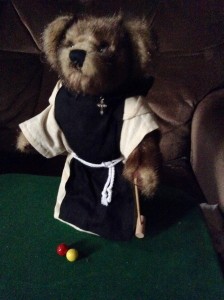 Me trying to play.

Some people visiting the house stopped to watch. I was glad that I didn’t play there as I really do not understand the game. Chris did find me a mallet later and I tried to play at home but I was not very good!

We found an old picture of the lawn on the computer thing. Do you know it has not changed since Churchill was alive. Amazing!

Anyway I am exhausted by it all so I am off to compline then my bed.