When I was coming back from Flanders I said that I grabbed my Rosary. Because I keep forgetting that your Church does not look to the Pope as head,  I am told you may not know what a Rosary is!

Well the rosary is a form of combined prayer and meditation that has been around for over 1200 years.  The origin of the rosary dates back to the ninth century where Irish monks would recite and chant the 150 Psalms of the Bible as a major part of their worship.  People living near the monasteries were drawn towards this beautiful and harmonious devotion, and they wanted to join in with the monks’ prayers.

The psalms were very hard to memorize and people could not read printed copies which were difficult to find anyway, so they found it really difficult. As a result, it was suggested to the people outside the monastery that they recite a series of 150 “Our Father” prayers in place of the psalms. This form of prayer became increasingly popular, people started to think of ways  to keep track of their prayers.  At first, 150 little pebbles were placed inside small leather pouches to keep count.  Since this method was rather troublesome, a thin rope with 50 knots on it was used instead and people went round three times. Eventually, a string with small pieces of wood was developed.

Over the years the prayers have developed, too so people may not recite psalms any more but they still say ‘Our Father’.

Chris tells me that she has a Rosary which was given to her by Pope John Paul 11! She does not use it often but it is one of her ‘treasures,’ which I can believe. I cannot be jealous because the 10 Commandments say that ‘thou shalt not covet’ which means I am not envious but it would be nice to have such a rosary!

I have found a number of different rosaries in the house. Chris has hidden her Pope’s rosary for safety so I don’t have that. Unfortunately Chris is busy at the moment so I can’t ask her to get it for me but I hope she show it to me one day. The dark blue rosary is a set Chris bought me but I like the one she made me which is in the middle. 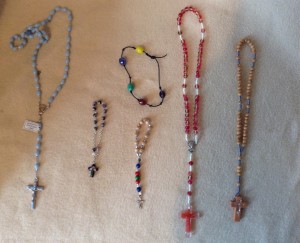 The other thing in the middle is some thing called Prayer Beads. As you can see this is a string of 5 beads which Chris can wear on her wrist and each bead reminds her to give thanks to God for something. Chris will able to tell you about the colours, so maybe we can tell you another time. She says it is really easy to make these and I remember people making them during the Sweeps festival which we went to in Rochester.

I hope to write soon.