It makes me cross that people say Augustine brought Christianity to Britain. It is true he introduced it to Kent but we in the north were already Christians. There is an island off the west coast of Scotland called Iona. St Columba was Abbot there for 34 years and he died in 597, the year Augustine arrived! Chris tells me that Iona is still a ‘holy island’.

We followed a way which you now call Celtic which was the same as the original Irish Church. Our celebration of Easter had a different date to that in Rome ( a bit like the Greek Church now). This got very confusing in my native Northumbria so, in 664,  there was a big meeting called the Synod of Whitby to decide which we should use. Unfortunately the southerners ‘won’ so the church in the whole of England developed along the Roman lines. 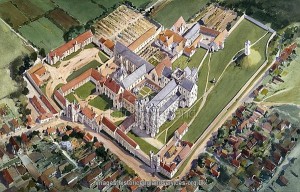 Anyway Augustine was a holy man and he built a great Abbey in Canterbury. It was a magnificent place when I knew it but Chris tells me one of the Kings, whom you call Henry 8th, stole the land from all the monasteries in the country, including St Augustine’s. It is now a ruin but you can still visit it.

I must go to Chapel and pray for the soul of St Augustine, among others.