Oh my word! I have been invited out to lunch to a place called Bromley College. Guess where that is? Its proper name is Bromley and Sheppard’s College and it is has nothing to do with learning. 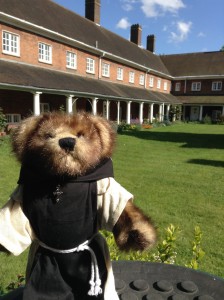 The cloister at Bromley

This College was founded in 1666 by the Bishop of Rochester for widows whose husbands had been priests, and their children. There was nothing like that in my day. If Dad had died when we were young Mum would have had to try to find a home with one of the family. If not we would have been homeless. A Monastery might have taken me for school and Mum might have gone into a Convent, just so we had somewhere to live. Many years before my time a child sent to a monastery would have had to stay there as a monk, even if he did not want to. 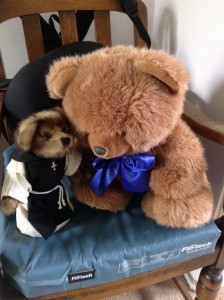 The Bishop wanted to build this place in Rochester, near the Cathedral, so that the residents could worship in the Cathedral but there was no land suitable. He then decided to build this place in Bromley and people still live there. Some are widows but there are also retired priests there now. Each person, or couple, has their own flat. The flat we visited was very comfortable and warm and it is very quiet. There are gardens which are lovely. Some of the trees were planted in 1666 when the place was built and they are still there!

Chris told me that the Bishop built the place there because it was in the country and he had a Palace just down the road. Now it is in a very busy place. When we arrived there was a huge car which Chris called Lorry and it completely blocked the road. Our car had to go backwards all the way to the gate before a kind man helped us to drive out onto a very busy road. Lorry had great difficulty getting out. He was so fat he only just fit through the gates and so long that he could not turn onto the road.

Apparently the Bishop’s Palace is still there but the Bishop now lives in Rochester so something called The Council live in his Palace. Chris said she was shown around it once and met someone she used to work with. 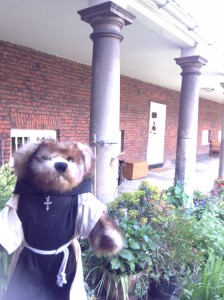 The Pillars from Royal Exchange

When we got into The College the first person I met was another bear. We did have a good talk whilst Chris and her friend chatted about things. After lunch I was shown around the College and taken to see the Chapel. People still use it every day, just like in a monastery but they only say morning and evening prayer. Some of the pillars in the cloister came from a place in the City of London called the Royal Exchange. Apparently there was a terrible fire in London in 1666 and most of the City was burnt down so these pillars were re-used. 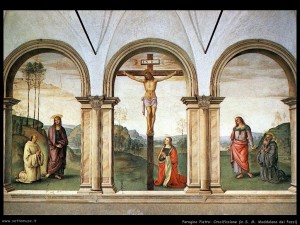 When I went into the College Chapel I saw a painting above the altar. It took me a few minutes to realise it is the same as the one in Talbot House! Chris says it was painted by an Italian called Pietro Perugino around 1493. The original is a fresco which means Perugino painted it on the wall. Some people say the person on the right is Father Benedict who wrote our rule. They also say that the other man is my friend Bernard of Clairvaux. Goodness, it does not look much like the Bernard I knew! At that time the building in Italy was a Cistercian Convent so Father Benedict would have been important to them and they may have known Bernard’s writings.

Driving to Bromley took less than an hour but coming back Chris said it was rush hour. I don’t know what she meant because I could have walked quicker – the car seemed reluctant to move! Horses can be like that sometimes!

It took us nearly twice as long to get home, just like coming home from France.

It is almost time for Compline so I must go.