Chris was away a long time and when she got back she told me she had been to lunch with some friends who were at the meeting. She has to go back to the house to see Shirley so I go with her.

This house was built in 1742 and was owned by a man who grew hops so he was rich. In 1915 there was something called World War One happening around Flanders so the family decided to move away. It is sad that you still fight wars, we had many in my day.

The British Army borrowed the house from the family and a priest called Clayton became the manager; for some reason people called him Tubby. He decided that the House should be open to anyone, whether they were officers or soldiers which was not really allowed but Tubby argued that Jesus had not worried about anyone’s rank so he wasn’t bothered either. 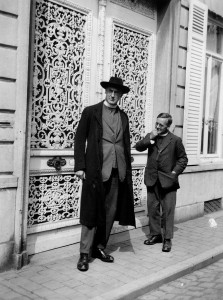 Neville and Tubby outside the house

Tubby’s boss was called Neville Talbot. Do you know his father was once Bishop of Rochester? Neville wanted to call the house Church House but his boss said that it should be Talbot House to remember Neville’s brother who had been killed a few weeks before. Neville objected but he was told if it was not Talbot House then it would not be opened!

The House has a big attic which Tubby turned into a Chapel called the Upper Room. Can you think why? Many soldiers were baptised and confirmed in the Chapel and many took their final communion before they were killed, for some it was also their first communion. The soldiers found a work bench in a shed in the garden and Tubby decided that it would make an ideal Altar. Why do you think that? Anyway the top is still the altar today!

After the war so many people wanted to visit the house that eventually the owner sold it to Lord Wakefield of Hythe who made a Trust. Some of the trustees have to be British and some Belgian so that is how Chris is involved.

Last year John and Chris were doing some cleaning up in the Chapel and they found two Chasubles. A chasuble is an embroidered robe a priest wears over his cassock but I don’t think Peter or Eileen wear one in our churches. Anyway John lives near Exeter and there is a shop there called Wippells and these Chasubles had a label in with Wippells written on them! John said he would take them to the shop and ask if they could clean the robes. They did so John has brought them back.

I could tell you lots more about the House but I need to go to Chapel.