Chris has had to go to the big house for a meeting so I can stay here and meditate. Sometimes I use Lectio Divina to help understand the scriptures. I read a passage slowly, then re read it. If a word or phrase jumps at me I think about that during my prayers and ask God what it means for me. If he replies immediately I know what to do but if not I will read the passage again and think about the phrase during the day. 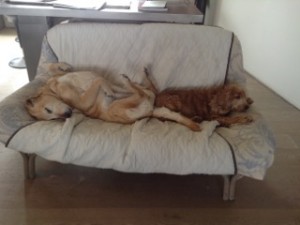 Both the dogs – Queen and Duchess.

Marc and Frieda have a dog called Queen. They had two dogs and the other was Duchess but she died a few days ago. Queen has been very quiet since because some animals are sad when  one of the family dies. Chris has brought her a special dog toy like a pheasant and Queen loves it. Frieda is amazed that she is looking happy again but I am told she has always got excited when Chris visits.

When Queen was a puppy the family lost her. They looked everywhere in the house and could not find her anywhere and were afraid she had got onto the road. The only place they had not looked was Chris’s room but Chris was out and the door was closed. Anyway they went in and found Queen asleep on Chris’s bed! She had opened the door looking for Chris, but it had closed behind her so she just went to sleep! 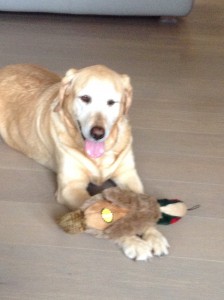 Queen with her new toy

Another time she saw Chris getting out of her car but Chris was staying in the house opposite. Soon afterwards Frieda knocked at the door and she was standing with both dogs. She said that Queen had got really upset because she had seen Chris get out of the car and was looking for her. Frieda had come across to see if Queen would settle after she had seen Chris. Apparently it worked!

I must get back to my meditations.