We loaded the baggage and climbed into the car, then we were off down a big road which Chris called a motor way. The roads are so much better than the mud tracks of my day but everything is so fast! I was barely able to take in the scenery as we sped along. I was rather sad because there is a place called Boxley near where we live and there used to be one of our monasteries there. I was hoping to see it but we sped by. 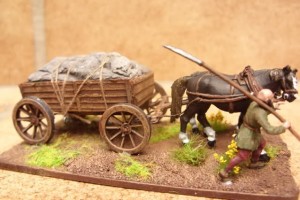 A wagon in my day

Some wagons towered above the car and I was told these are taking provisions to market. Some shot past our car.  It is raining so I am pleased the cars are much more weather proof than the wagons of my day.

We get to Dover in an hour  so fast!

Oh my word! I have never seen such a big boat. It towers above us and it’s made of iron so how will it float?

There wasn’t a horse in sight but there were lots of cars and Chris told me they were all going onto the boat. She said the wagons were going on, too. I was praying so hard!

We went up a hill which Chris called a ramp into the boat then had to go up another ramp to leave the car. There are other cars all around and downstairs there are some of those huge wagons we saw- goodness.

The boat we crossed on.

Chris took me up some stairs and we went into a dining room and when we had bought something to eat we sat at a table right at the front of the boat so I could look out. It was still raining so once we left Dover I could not see much.

Just after we finished eating a huge wave came over the front of the boat and hit the window where I was standing. Thank goodness we are not on one of the boats I remember or I would be soaking wet.

I went for a walk around the boat. 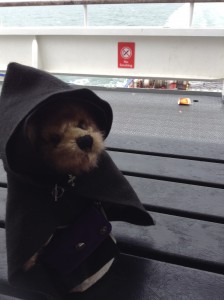 In the open on the boat

There is a shop which sells all kinds of things and there is a bar where you can by ale. There was a place where I could go outside so I did. I am so pleased that I have my cloak because it was very windy and I could hardly stay on my feet. Our sailors may not have gone in this weather but, of course, if we sailed in good weather it could turn like this when we were mid journey. I am told there is a deck above us too. Despite the wind I could hardly feel the waves. This is wonderful.

Do you know?  Chris was right we arrived in Dunkirk two hours after leaving Dover – amazing! I can tell you I said some prayers of thanks that we got there safely.

As we drove I saw some names I recognised. St Omer was an important port but the river silted up so a canal was built to Gravelines which became an important port. I also saw roads to Lille, Bruges and Ghent and we were heading for Ieper (In my day it was spelt  Ypres and it was an important city in the textile trade.)

We did not drive as far as Ieper but stopped in a town a few miles before the city. It was still pouring with rain but we managed to park just across the road from her friends’ house.

A welcome cup of tea was waiting for Chris. I don’t like this tea and coffee which you all drink. In my day we drank ale or cider and sometimes mead. In Burgundy I drank wine. Water sometimes made us ill but I suppose it is alright if you boil it. I am told Flanders is famous for its beer which is like ale. I am pleased to see there is some wine on the side, maybe we will be able to drink some later!  Chris tells me there are some Cistercians who brew a very famous beer and the monastery is not far from where we are staying but we wont have time to visit. Shame!

There is a big house opposite where we are staying which is called Talbot House.  Chris says that she will take me there so I’ll tell you all about it after we visit.

It is time for compline. I can tell you I am really looking forward to my bed tonight.