I have just come back from Rochester. There is a festival called the Sweeps Festival When everyone needed their chimneys swept the festival, at the beginning of May, was the Sweeps’ Holiday. They had a 7 foot character called ‘Jack in the Green’ and had a ceremony at dawn on Blue Bell Hill near where Chris lives. She didn’t get up for that! I didn’t see anything of the festival but I did hear some very loud music which I did not like very much and saw lots of people.

Chris and I went into the Cathedral where Chris was offering visitors a hand massage. The first person she met was from Holland and the family were here on holiday. We found out afterwards that the visiting choir is also from Holland. 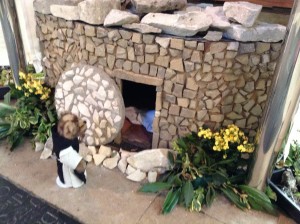 The Easter Tomb in the Cathedral

I did not see anything outside the Lady Chapel but I was really intrigued to  see a model of the Easter Tomb. There were also people lighting candles.

Chris ‘bought’ a tile from the roof which will be replaced with her name on it! I was a bit upset she did not buy one for me but she did get a second in memory of her Mum & Dad.

It was lovely to be in the Cathedral for Evensong. Chris had to ‘work’ through it but we were able to hear it well.

There was an exhibition about a really old manuscript called the Textus Roffensis. Apparently this is owned by the Cathedral and was written when I was a boy. I would really love to see that sometime.

The bell is going for Compline and I am looking forward to my bed after such a busy day.

I shall write soon.