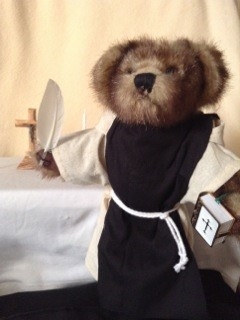 I am Aelred and I have been asked to tell you a bit about myself.

I was born in Northumberland in 1109, the son of a priest. Dad sent me to school at the Scottish Court where I grew up with Prince Henry, son of King David. The King gave me a job when I left school .

When I was born the king of England was called Henry, like my friend, and his grand-son was also Henry so it is very confusing. I am told that there have been lots of Henrys since but I believe Henry the Elder was who you call Henry 1.

When I was 24 I joined the monks at Rievaulx Abbey in Yorkshire , which is a Cistercian Monastery . The monastery was new then so there were not many of us and in 1147 I was asked to be the third Abbot.   When I became Abbot the monastery grew and it eventually became one of the most important monasteries in England.

I love writing and when I’m not visiting places I always have my quill at the ready. I have written lots of books, and I am amazed to learn that some of them can still be read. I wrote them all by hand, not with the strange machines that you have now. I find modern life very confusing!

When I visited your church of St Mary, in Hunton, I was asked if I would write a blog, whatever that is. I’m told it is a bit like a journal or diary. I am not sure I will be any good at ‘blogging’ but I may try to write to you sometimes. Your Reader, Chris, has said she will help me when she can.

You have another strange machine which takes images and I believe you call it a camera. I have enclosed an image of me standing by an altar with my quill and my Bible.

I hear the bell for compline, the last service before we go to bed, so I must go.